He was shot in a gun fight with a horse thief on June 5, 1875, and died of his wounds either that same day or the next day. Some records show the date of his death as June 7th and the grave marker shows June 5. Alex Ramsey was the Sheriff of Ellis County at the time, and his duties on that particular day lead him down the path of chasing horse thieves on a summer evening.

Ramsey and his deputy Frank Shepard rode north of Hays City following a trail of horses leading north to Stockton, Kansas. They spent the night on the trail and the next morning when they arrived in Stockton, they learned that two men with a bunch of horses were camped outside of town.

When Ramsey, his deputy and several men from Stockton overtook the camp, Ramsey and one of the outlaws, "Jim", exchanged shots. Ramsey was shot in the abdomen and the horse thief was shot through the heart and killed. The other thief rode off on his horse after firing at the other men who had accompanied Ramsey.

A few days after this shooting incident, it was reported that a doctor from Smith County treated a man who claimed he had accidentally shot himself. Officers went at once to investigate, and sure enough it proved to be the horse thief. He had actually been shot by one of the men who were trying to help Sheriff Ramsey capture the horse thieves. The man's name was William Stanley and he was put in jail, and a trial was held, but he was found "not guilty". Evidently the horses were stolen from Indians and it was determined that "technically" he and his partner were not guilty of any crime.

Because there was no way to immediately get word to Ramsey's wife, the sad news was not sent home, and due to the extremely warm weather, the remains of the sheriff were kept in Stockton until that evening. They covered the body in canvas and transported the corpse in a spring wagon for the 45 mile journey.

Even though Mary Ramsey had not received word about her husband's death, she had a strange premonition that something terrible had happened to him. She begged and pleaded to friends, and ask 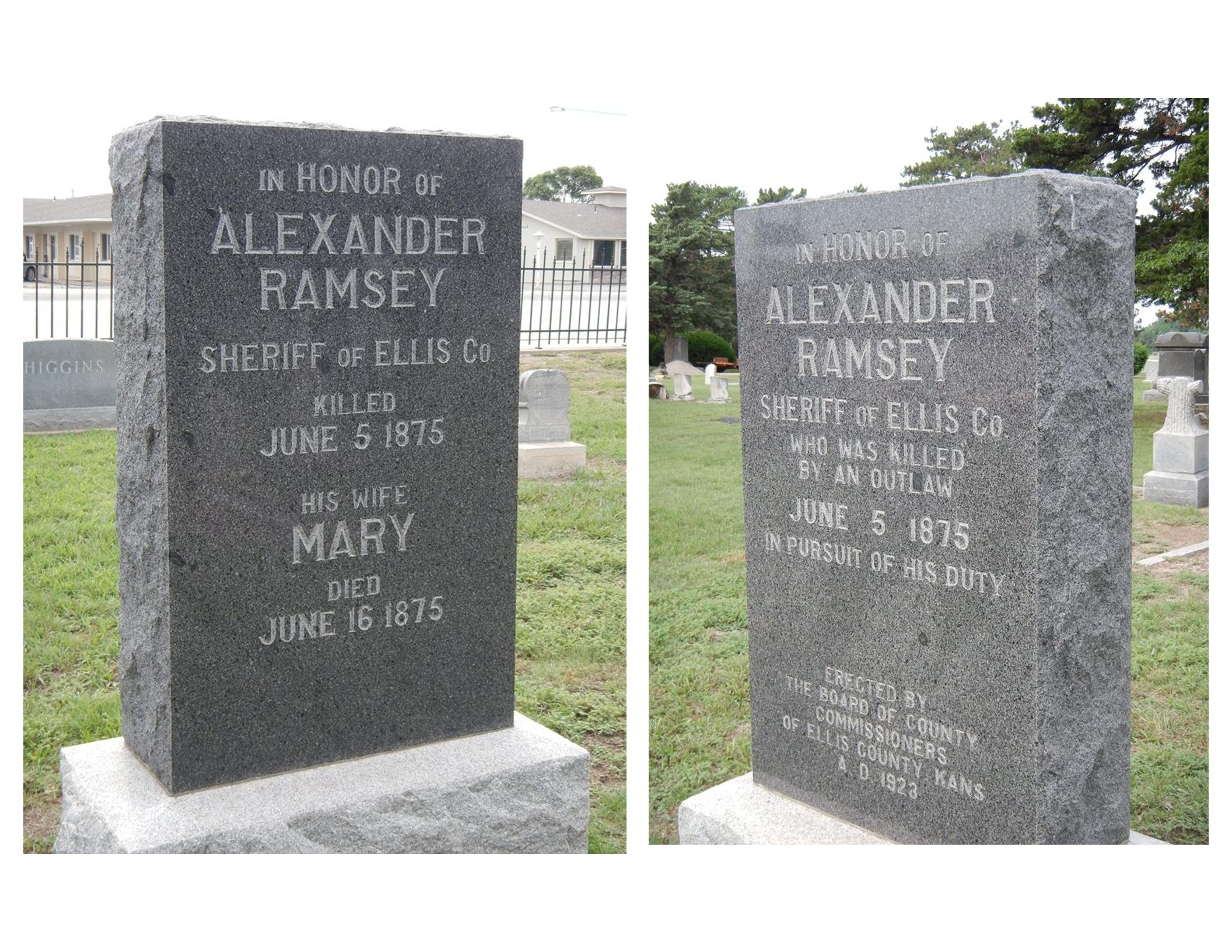 ed them to travel north to search for her husband. Arrangements were made for a horse and rig, and a small group accompanied Mrs. Ramsey as they set out north toward the Saline River where they came across the spring wagon heading south to Hays City with the remains of Sheriff Ramsey.

Mrs. Ramsey was so distraught and suffered with the death of her husband that she became ill and died of grief on June 16, 1875.

The current grave marker was erected in 1923 by the Board of the County Commissioners.